It was still dark as I set off on my next Constant Ramble from The Crown Inn, Penn, Buckinghamshire. I had intended to arrive at sunrise but had miscalculated the journey time. I could see quite well walking along the lit streets of Penn, but before long I was in a dark, tree-covered alley in squelchy mud. After several minutes I came into a clearing, and was greeted with a manicured lawn climbing steadily to a white house atop a hill – light at last!

Turning left into a tunnel of fir trees I arrived between two horse paddocks, containing one large and one miniature horse. I suspect they thought I was bringing breakfast as they followed me closely, their mouths within nibbling distance of my backpack, until I escaped into the next field.

Sunrise! I paused to bathe in the light, took a deep breath of the morning air and smiled.

The Chiltern Way boasts a plethora of individual stiles. My first of the day was unique due to the concrete reinforcing bars used to prevent walkers and animals bypassing it. Perhaps a tad excessive, but if it does the trick who am I to criticise? 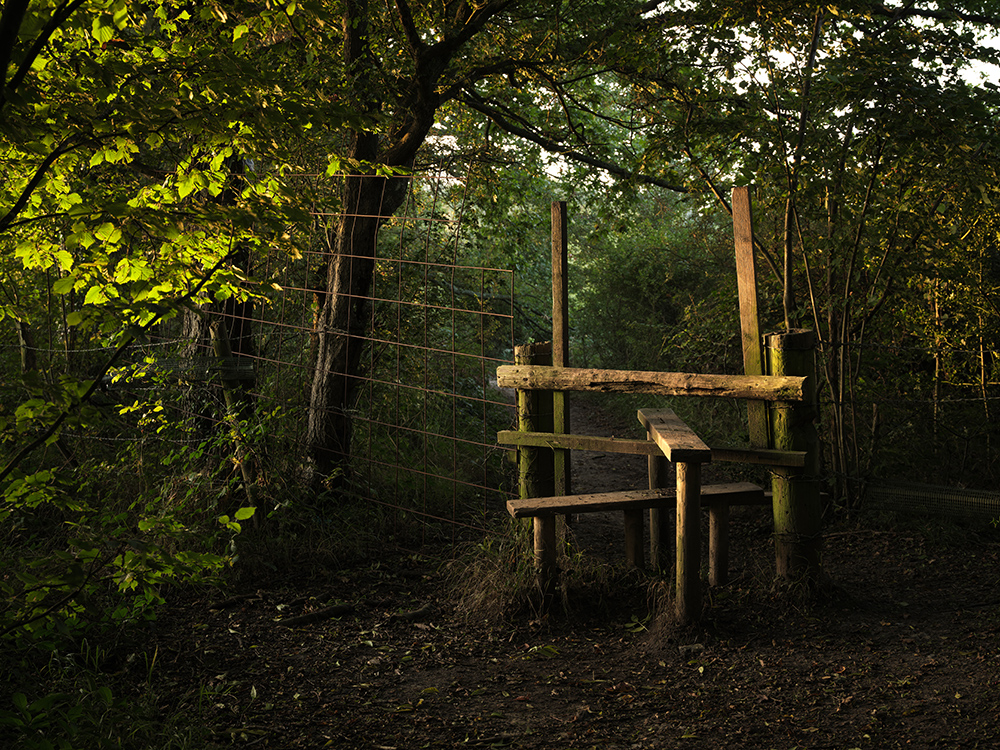 Before long I arrived at the first real crossroads of this Constant Ramble. The Chiltern Way was officially launched by The Chiltern Society in 2000. To mark its tenth anniversary the Berkshire Loop was added. I’d been wrestling with which route to take but had decided to avoid loops and complete the original route first. My decision was rewarded with a fantastic vista looking towards the Wye Valley; the vehicle tracks in the middle of the recently reaped field seemed to be luring me to follow. 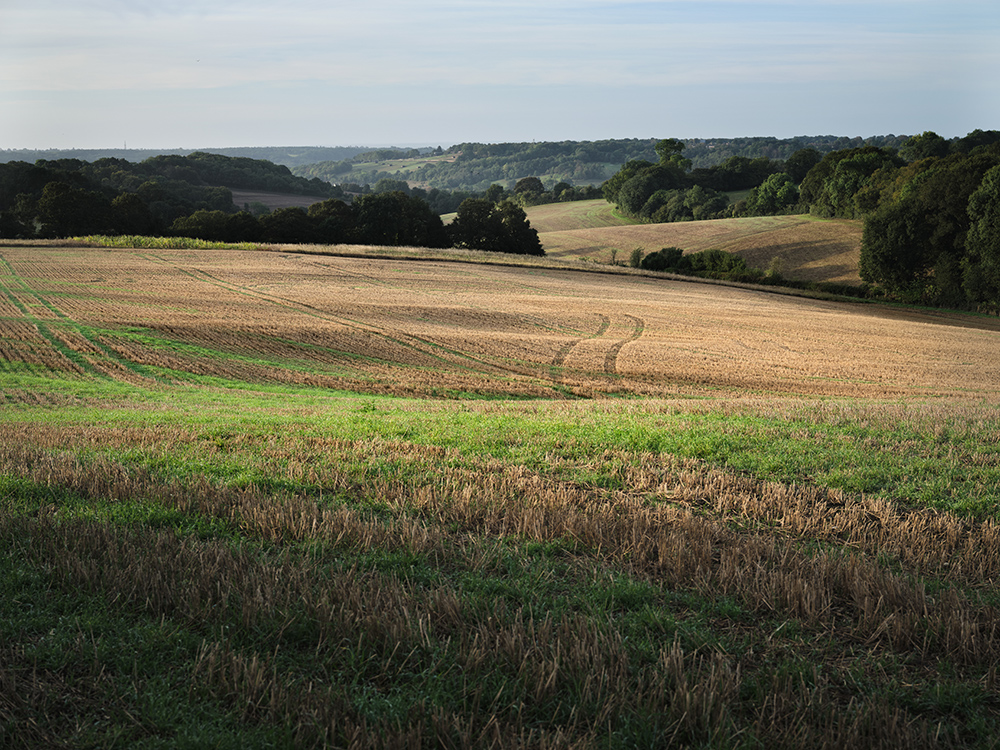 “Golf is a good walk, spoiled.” Harry Leon Wilson 1904. (Many attribute this quote to Mark Twain but it’s not the case.)
Fortunately, the crossing of Wycombe Heights Golf Club was not going to spoil my walk, but I wanted to photograph an aspect of the course. Golf is a game whose essence challenges humanity to master the manicured interpretation of nature in the form of the course or, as Winston Churchill put it, “Golf is a game whose aim is to hit a very small ball into an even smaller hole, with weapons singularly ill-designed for the purpose.”

I observed many men of a certain age practising their swing and putting technique before teeing off at the first. But I wasn’t interested in photographing that. I like to capture the legacy of human interaction with nature, and it wasn’t long before I noticed fresh footprints in the early morning dew on a putting green. There’s a profound beauty in the fleeting imprint of feet onto a product of nature, only for nature to quickly erase it through the heat of the sun. It is symbolic of humanity’s fleeting existence in relation to the age of the earth. Let’s hope our footprint doesn’t burn away as quickly! 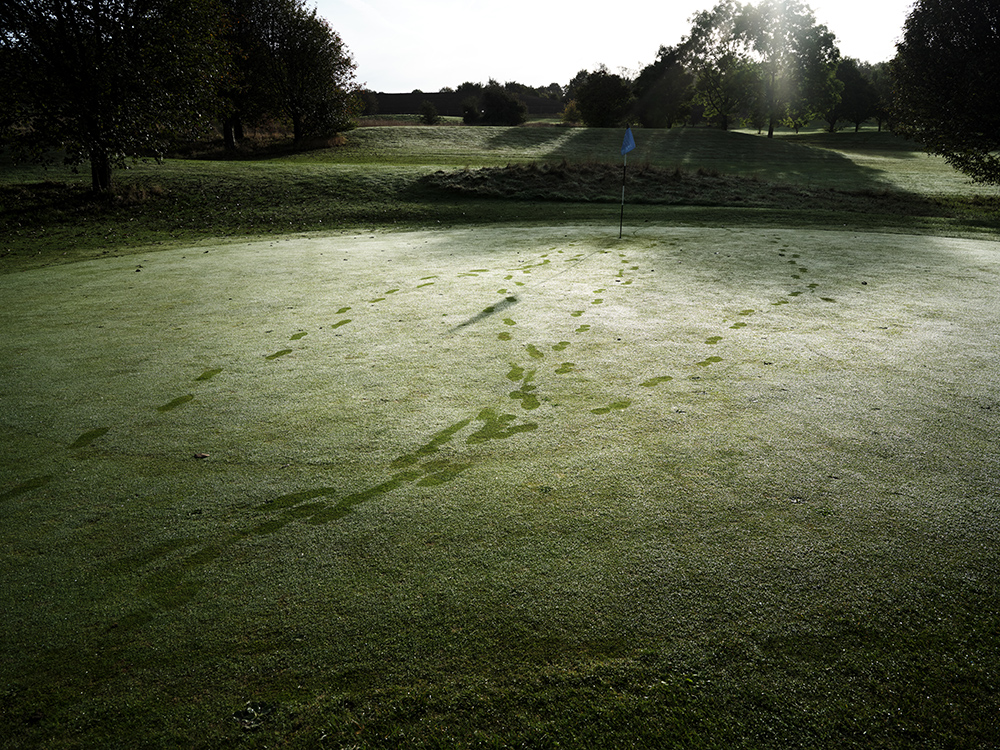 This is the first walk to take me through a populated area. One becomes so accustomed to fields and woodlands that it’s a shock to the senses to be surrounded by concrete and noise. High Wycombe sits in the Wye Valley fed by the River Wye. I used Charles Rangeley-Wilson’s book The Silt Road as source material when planning The River Meadow at the Pile of Stones. I found the writing and the journey to be of prime inspiration for my own undertaking. Charles and I have now become acquainted: he bought my book and we worked together recently at the launch of the government-backed Chalk Streams Strategy written by Charles. So, with excited anticipation, I crossed the Wye on foot for the first time. Although the location alongside Kingsmead Business Park was not ideal, its dancing waters still made my heart sing. 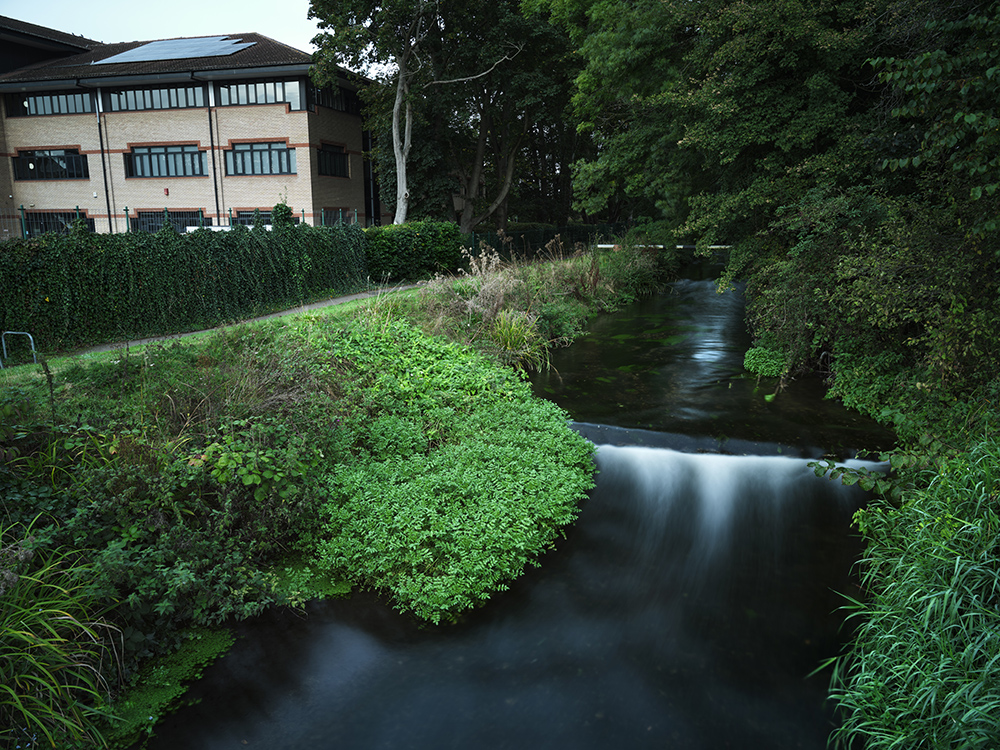 I crossed the King’s Mead playing field and started to climb up through Fennell’s Wood towards the M40 motorway. Aside from walking underneath the A41 dual carriageway at the start of The Chiltern Way at Hemel Hempstead, I had yet to cross a road of this importance. I studied the OS Map app on my smart phone and referenced The Chiltern Way Walking Guide but couldn’t see a bridge to cross. I continued, and there before me, like a Soviet-era bunker, was the underpass, whose entrance was decorated with local graffiti. A deep black hole lay inside, punctuated only by a dim, distant small square to signal its exit. I stopped and prepared to photograph it. “What I need now is someone to walk through it.” As if by magic, a woman walking two dogs passed me and continued up the tunnel. 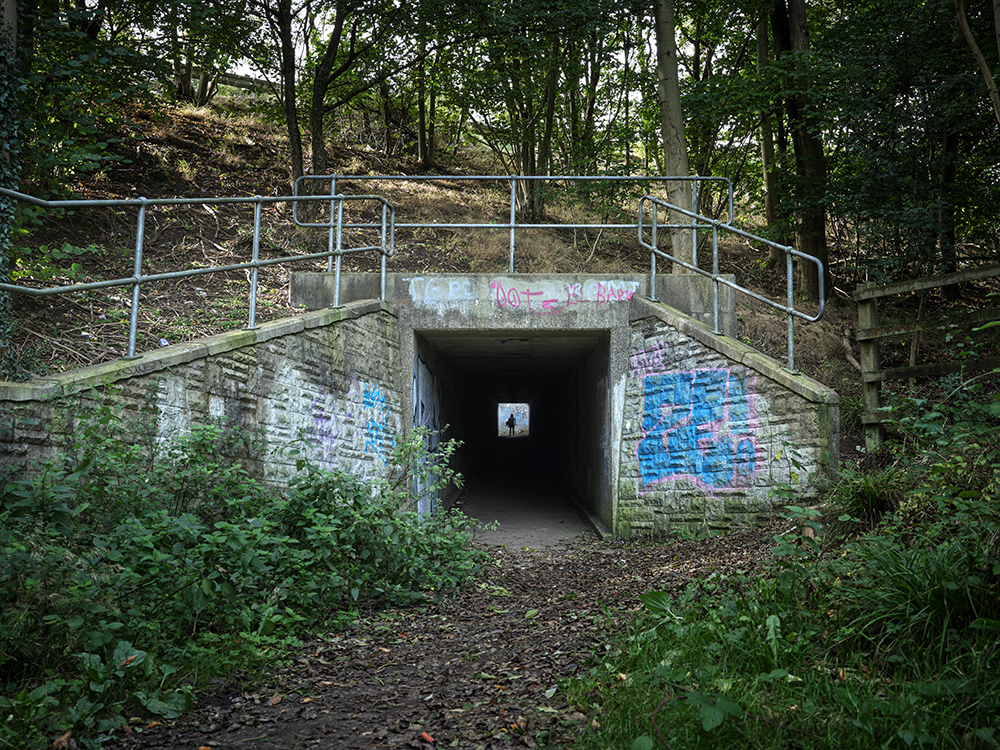 I got halfway through the tunnel and stopped, it was dark and deceptively steep. I exited up a flight of stairs onto a path. Nature was trying to reclaim the stairwell with overhanging growth, the shadow of which was projected by the fading afternoon sun. 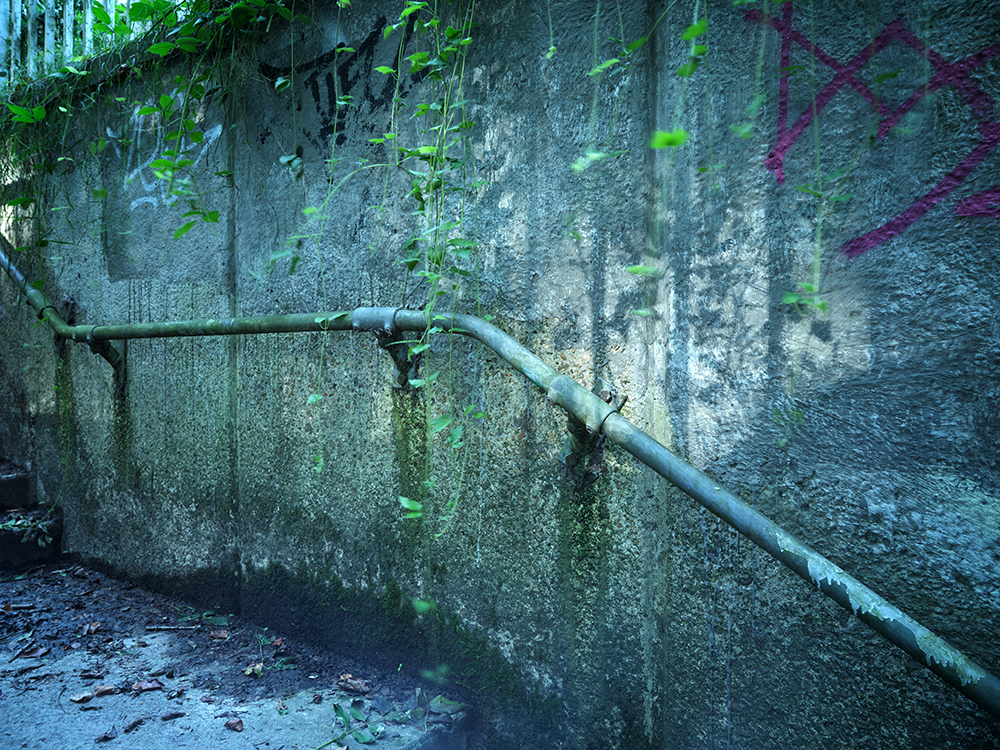 Passing a housing estate on my left I entered a coppice with ‘CW’ letters painted on trees to indicate the direction of The Chiltern Way. I walked down a narrow alley between back gardens fences and exited onto the main street of Flackwell Heath. Like Samwise Gamgee leaving The Shire in The Fellowship of the Ring I stopped and thought, “I have never walked on this side of the M40 before.” I felt like a pioneer crossing a mid-west American prairie for the first time. I turned right and walked along the street to locate the path. The eyes of students from Buckinghamshire College followed me as they waited for the bus. I turned left down a narrow alley, and a breathtaking panoramic view of the Thames Valley was revealed. 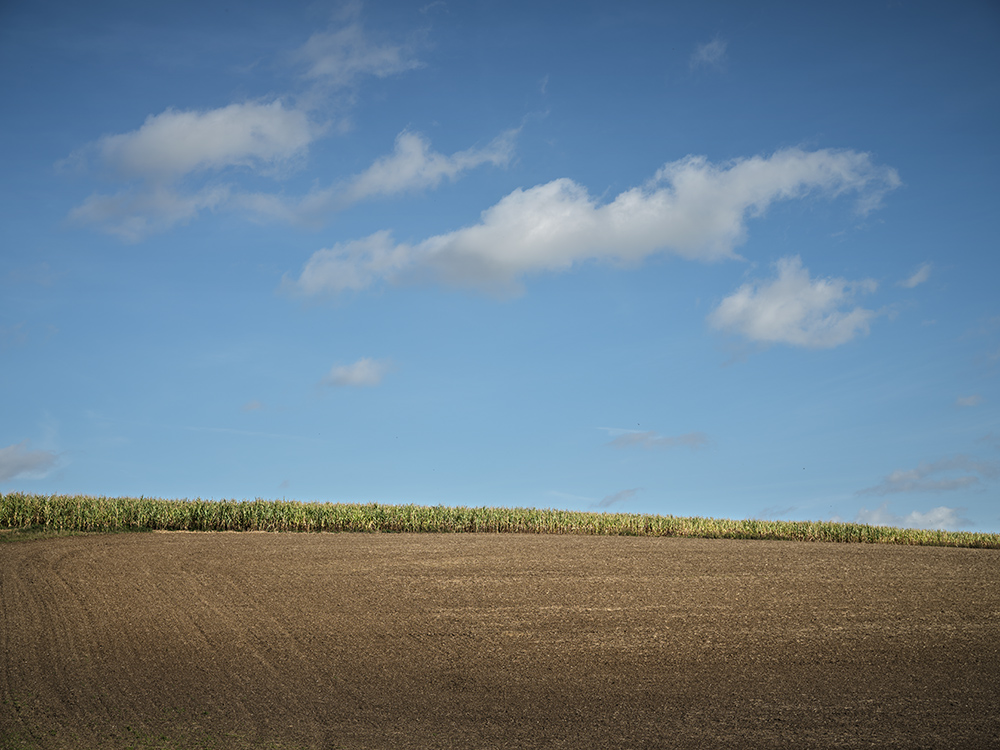 I floated on a wave of calm euphoria down the never-ending hill towards Sheepridge, pausing only to soak up and capture the scene. If I could have bottled that feeling, I would take a sip every day. 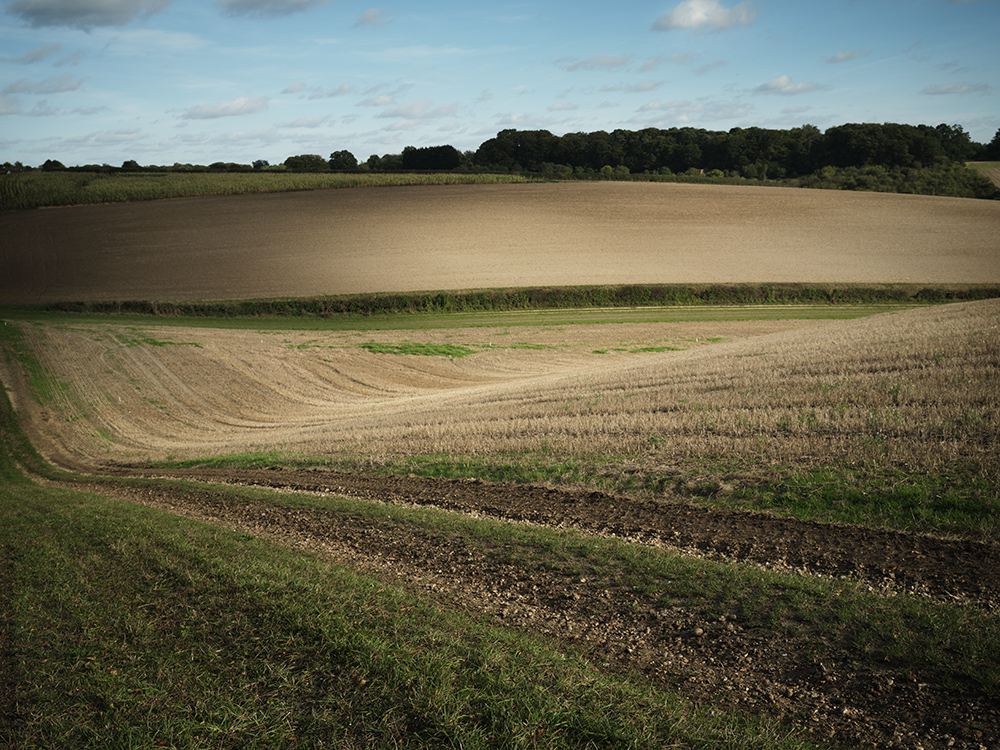